Like role playing? Try out the Governor / Council System!

Administrator
Game Master
Moderator
Staff will work with Player Governor's to help them facilitate their rule. You can create your own titles, King? Arch-mage? Dictator?

Players with a sufficient amount of loyalty to a city are able to nominate themselves for the post of ‘Governor’. Citizens of that town can endorse candidates, then vote in a general election to select a Governor. The Governor will have the ability to negotiate trade deals with NPC Guilds, grant titles to the citizens of the City, and attend council meetings with the staff of Heritage. 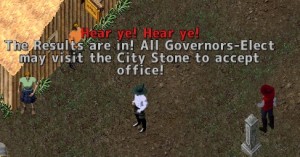 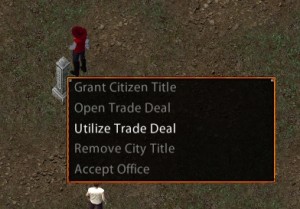 A City Trade Deal Buff Icon appears when it is active: 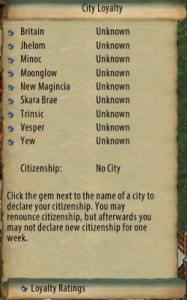 City loyalty is viewed through the ‘loyalty rating’ link on the character’s context menu, this menu is displayed by a single left click on your character. Clicking on the loyalty ratings link opens a further menu, a blue gem at the bottom accesses the further page ‘City Loyalty’.

Any character can gain loyalty for any city by performing quests or donating items for the benefit of the city. The further option of gaining loyalty for one particular city through killing champion spawns is made possible by becoming a citizen of that city.

To declare loyalty to a city simply click on the blue gem beside the city name in the listing, you can do this at any time, there is no loyalty requirement.

When a city has been selected these blue gems will be replaced by a gem at the foot of the list allowing you to renounce your citizenship. If you do this you must wait one week before you may become a citizen of a different city. A second button is available on this page for city citizens, this allows them to buy a citizenship title.

This explanation of city loyalty comes from official sources.

For each city, each player character has individual ratings for Love, Hate, and Neutrality. These values are numeric and the raw values are not displayed.


A character’s loyalty rating from a city consists of two parts: how well the character is known, and how “pure” the character’s actions are. There are essentially three possible outcomes:


Here are all the possible ratings:


Notes about the system:
Earning Loyalty

Each city has 3 main employees:

The City Herald, found at the City Stone, close to the bank. You may gain loyalty by donating gold to him (drop on him).

The Minister of Trade, found on or near the dock. Single click him to accept a trade order, filling the order and delivering it will gain you not only his thanks, but also those of the city you deliver to (loyalty to both). The trade minister also has nearby a crate and a hitching post. You may donate items by dropping them into his crate. Acceptable donations are: Boards, ingots, hides, cut leather, cuts of ribs, bread, crabs, lobsters, fish steaks, bows, crossbows, simple potions.
You may also donate livestock by transferring them to the hitching post. Acceptable donations are: dogs, cats, cows, goats, horses, sheep, pigs, chickens. This list is included in a greeting from him, double click him to read it.

The Guard Captain, double click the box by his feet to get a rope, use this to capture raiders found at the brigand fort on the Britain to Yew road. You will need to fight them to a low health before you can capture them (double click rope, target raider). Return them to the guard captain and turn them in. The captain also sells the city banner (single click for context menu). To buy a banner you must be ‘adored’ in the city, you may only buy one banner per week.

Guard Captains are found at the following locations:
Bulk Order Deeds, crafters may gain loyalty by turning in completed bulk order deeds to the smith and tailor npcs of the city of their choice.

Become a Citizen. Loyalty is also gained, if you have declared loyalty for a particular city, when fighting champion spawn

Rights and abilities listed are the minimum at which a citizen has that ability, a character with high loyalty also has all rights listed for loyalty levels below. 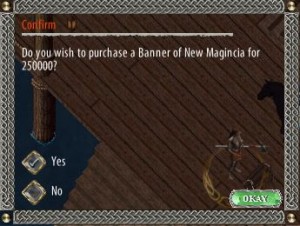 Administrator
Game Master
Moderator
We'd have to take away a city.

That being said it COULD be WAY more interesting if there were only 2 or 3 cities to choose from. (Being a small shard)

Dan said:
We'd have to take away a city.
Click to expand...